Many creative people claim cannabis plays a key role in their creative process, but whether it boosts creativity probably depends on the personality of the creative person.

“Where the drugs are concerned, and alcohol, they do seem to open a window for you. They do seem to broaden the vistas—at first,” comedian George Carlin once said.

Steve Jobs claimed that smoking cannabis made him feel relaxed and creative, while Alanis Morissette said that it helps keep her creative juices flowing. And you probably already knew that Charles Baudelaire, Amedeo Modigliani, and Louis Armstrong used cannabis too.

It begs the questions, is there something special about the most popular illicit substance in the world that makes it more conducive to creativity? And, is a lack of creativity a treatable condition?

One hypothesis is that, because drugs can lower our inhibitions, they help to silence the self-editor that tends to harshly criticize what we create, allowing us to overcome writer’s block or simply the fear of creation.

A 2017 study previously published in the journal Consciousness and Cognition brought us closer to that conclusion using cannabis smokers who creatively outperformed non-smokers over the course of two tests. The researchers used the Big 5 model of personality to primarily assess 979 undergraduate student participants. They then asked the group to rate their own levels of creativity and followed that up by objectively measuring creativity among the students one test for divergent thinking and a separate test for convergent thinking.

The results indicate that, while there was no significant difference between the two groups on the divergent thinking test, cannabis users outperformed non-users on the test that measured convergent thinking.

According to the study, cannabis users may be more creative than non-users, but cannabis is not a creativity booster. The psychoactive compounds in the cannabis plant are stimulating and thus boost output of all kinds. Ultimately, the results suggest that marijuana use has no effect on creativity but on the perception of one’s own creativity.

Cannabis in the Creative Process

Cannabis users tend to have different personality traits — for instance, being more open to experience than non-users — something associated with both cannabis use, and heightened creativity.

Many creative people claim cannabis plays a key role in their creative process, but whether it boosts creativity probably depends on the personality of the creative person. A very sensitive creative person may get some benefit from cannabis, but for someone who’s already in the zone, it might push them into a place of being too “couch locked.”

And what do we do when science finds that, yes, cannabis does unlock creative potential? Could using cannabis eventually be recommend as a way to overcome “writer’s block” or one’s lack of a muse? The results of studies that suggest creative process can be facilitated by drugs might be construed to imply that a lack of creativity indicates a “brain deficiency” that requires drugs.

Understandably, speculations on the involvement of particular brain regions in the creative process are of scientific interest, but what’s most evident is that more research is necessary. 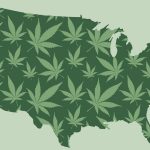